The Thames Barrier is a large flood control structure on the river Thames in London. Its purpose is to prevent London from being flooded by an exceptionally high tide moving up from the sea, often associated with a storm. Its construction began in 1974 and ended in 1982. It is situated downstream of central London at Woolwich  Reach.

The film depicts a devastating flood which strikes London when the Thames Barrier is overwhelmed by a storm and a huge surge of water.

The film is based on the 2002 novel, Flood written by Richard Doyle.

The film was shot on location in London and South Africa. The special effects are stunning. They depict famous London landmarks such as Big Ben, the London Underground, the Houses of Parliament, the London Eye and the Dome, the O2 being partially submerged under water. 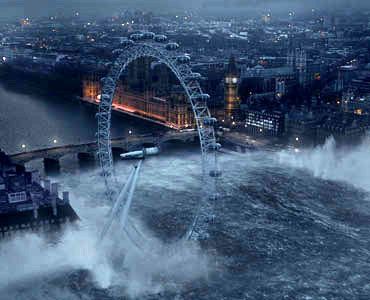 the London Eye... of the storm

Twenty-six studio sets were constructed with built-in water effects to shoot the actors in a wide range of flood sequences. Miniature sets in water tanks were used to shoot larger flooded buildings such as the Thames Barrier, London Underground and car parks. Computer generated visual effects were used to create shots of flooded London by combining shots of London with digitally created water. Locations in Cape Town were used for Whitehall, the Scottish coastline, London Underground and the Thames Barrier.

Here is the trailer :


Phew, we had a narrow escape !


This post is useful for my research writing, thanks!